“Ever since I was little, I’ve dreamed of coming to the States to study,” says Benoit, a PSE Trimester program student from France.

The problem was, his parents did not feel comfortable with him leaving for a year. So, Benoit was very pleased when he discovered the PSE Trimester program, which involves living with a host family and attending a private school in the U.S. for 12 weeks.

Benoit has fully embraced the experience, becoming involved in various sports and activities at school, traveling and participating in events with his host family, and bonding with his Chinese host brother.

Joining the track team at school was an especially fun experience for Benoit. “I have wonderful memories of great times spent with my track team,” he shares. 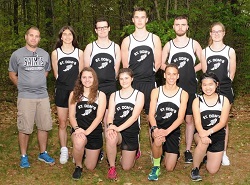 Benoit traveled with his host family to North Carolina, where they visited one of the biggest natural habitat zoos, went shopping, attended a college lacrosse game, and toured some of the larger well known colleges and universities in North Carolina.

He also attended a monster truck show with his host family and their friends, which was a unique experience.

Sightseeing and traveling were enjoyable, but attending school was definitely a highlight for Benoit.  He made many friends and enjoyed his teachers. He appreciated the small size of the school and how easy it was to get around, and was impressed with the curriculum. He admits that math class was quite difficult, but he was thankful for his teachers, who he describes as being very helpful.

“With this experience, I have learned to better adapt to something new and this will help me in the future. Also, of course, I have improved my English, and have become more sociable!” Benoit shares. 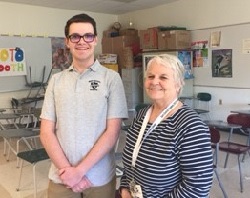 This experience did not come without some challenges for Benoit. English has been his biggest challenge, and he explains that he felt at first that people had difficulty understanding him because of his accent. He claims that it grew easier as time went by, however.

Benoit indicates that his host family is really nice and that he was lucky that they were hosting another exchange student from China, with whom he became close. His host family also enjoyed having Benoit and were impressed with his manners and politeness. 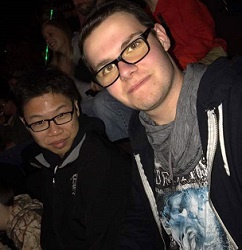 “His English in the beginning was a little hard to understand but he has gotten much better,” shares his host mother, Tricia. She shares how she was glad that there was another international student in the home, and feels that this helped Benoit with the transition.

“We’re hoping Ben has enjoyed his time here with us and we can’t wait to continue the relationship once he leaves, ” says Tricia.