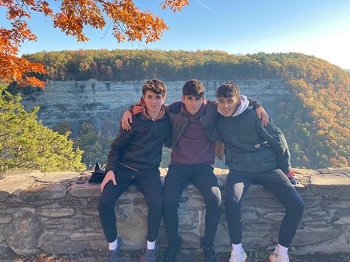 Miguel, an only child from Spain, has learned for the first time in his life what it is like to have three brothers. 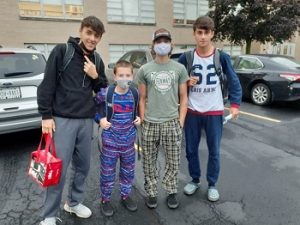 A PSE Trimester student in Rochester, NY, Miguel is hosted by a family with their own two sons, Joey and Jake, as well as another PSE student from France, Felix.  Joey and Jake have introduced Miguel to the sport of hockey, which he enjoys playing immensely, especially with his host brothers.

“I have learned how to play hockey with my host brothers because they play on a high-level team. I’ve really enjoyed playing hockey with them!” he says.

Miguel has been to many different hockey rinks between Buffalo and Syracuse watching his host brothers play hockey. Joey also introduced him to air hockey, which they enjoy playing together as well. 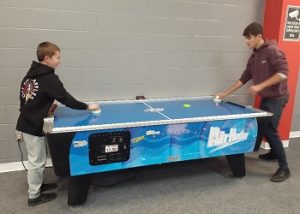 Miguel’s arrival to the U.S. on the PSE Trimester program was his first time ever being in America.  He applied to the program in the hopes of improving his English, meeting new friends, and enjoying all the exchange experience has to offer. Overall, he has found the experience to be very rewarding and American people to be very friendly and welcoming.

Miguel has especially enjoyed the opportunity to play American sports:

“I have enjoyed practicing American sports like football, basketball, baseball, lacrosse, and especially hockey” he shares.

Miguel also had an opportunity to be a member of the soccer team at his American high school, and raves about how friendly and competitive it was.

“In my opinion, soccer is better in America than in Spain. The main reasons are that the soccer coach never changes, you practice with teammates of all ages, and it is like a family.”

A favorite memory of Miguel’s took place during a soccer game during which his team was playing well but were not making any goals. He made three assists in that game, and they ended up winning 4-0. 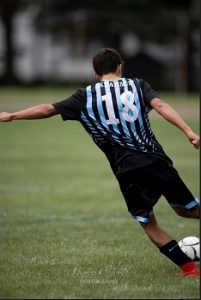 “I remember my host family, teammates, and schoolmates all cheering for me and congratulating me for a job well done,” he recalls. Miguel believes that their trophy win was due, in part, to the competitive nature and great unity of the team.

Sports and host brothers are just a couple of the “firsts” that Miguel has been able to experience on the program. Another was attending a U.S. high school for the very first time.

“In my opinion, the main difference (between school in Spain and the U.S.) is the fact that in the U.S., the school is like your family – you almost live in the school. Attending school in America is not boring because almost everyone practices a sport after classes are over.”

Living with a host family was another first for Miguel, which has been a very positive experience. He describes his host family as awesome, kind, helpful, and nice. 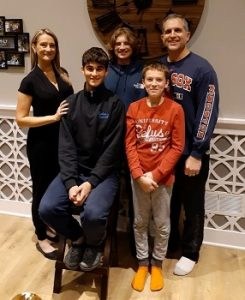 “They are perfect for any student who wants to come to the U.S. They always took care of me, gave me advice to join the soccer team, and helped me with school and English.” He also grew very close to the other international student who lived with them, Felix from France.

Miguel’s host mother, Melanie, says that it has been a pleasure having Miguel in their home. She describes him as helpful, sweet, and polite. She shares that he is a shy and curious teenage boy who tries very hard to communicate.

“Once you get him talking about soccer, or something he is passionate about, he can really get going,” she shares.

She appreciates how Miguel is excited to learn new things and experience things with their family that they enjoy doing, including watching old episodes of “Seinfeld” together.

She says that although Miguel is an only child in Spain, he has integrated really well with their family and his host siblings in America, and they enjoy doing all sorts of things together from biking, to kayaking, to carving pumpkins for Halloween, to running a relay race fundraiser at school. 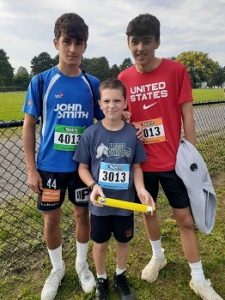 Of course, as with any intercultural experience, exploring new foods in America has been a first for Miguel. Melanie really enjoys cooking, and Miguel has appreciated all the great food she has prepared.

“I have tried so many foods that I have never eaten. Melanie is a very good cook!” says Miguel.

Melanie laughs, “Miguel is a skinny kid, but boy can he eat!”

Melanie’s mother-in-law made banana bread for Miguel when she knew she was going to see him because he enjoys it so much. She also recalls taking him to experience their Rochester favorite restaurants like Dinosaur BBQ, Monte Alban, and Bill Grays.

“We enjoy having him experience typical American food like cheeseburgers, pizza, and chicken wings,” says Melanie.

Miguel has also been fortunate to visit many places for the first time with his host family. 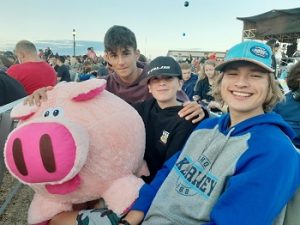 Attending the New York State Fair is one memory that they will always cherish. “Miguel got to see animals, ride rides, and see a concert,” shares Melanie. Miguel recalls, “I have never been in a bigger fair than that one. We tried almost every fairground ride.”

Miguel says that he’s made a lot of friends in a short amount of time. Most of them were from the soccer team. He shares, “I went to several parties with my friends, and we also came together to watch soccer games at school. I’m gonna miss them so much. Especially Felix!” 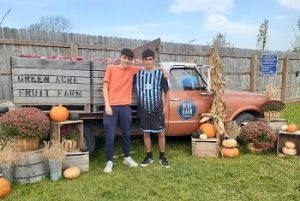 Melanie says that one of her favorite memories has been when Miguel and Felix watched a important soccer game on television between France and Spain. “They were so funny jabbing each other back and forth about which team was better and who was going to win,” she laughs.

Miguel says that although it was short in duration, he will always remember this exchange experience and couldn’t ask for anything more.

“I will always remember each person here for the rest of my life. This experience allowed me to meet new people, have new thoughts, ideas, new ways to learn and improve my English greatly.” 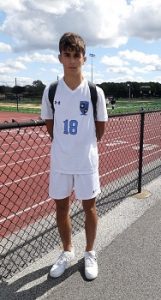 Melanie says that their exchange experience with Miguel has made their family appreciate all the things that Rochester has to offer.

“We have rediscovered places that we had not been to in a while. It’s also interesting to learn how our lives are similar and different. It’s super cute that my 12-year-old has a couple of big brothers to play knee hockey with or show his bunnies and hamsters to.”

“Miguel, his host family, and Felix really enjoyed the exchange experience together, and he will certainly be missed and remembered. I really enjoyed working with him while he was here and would like to wish him the absolute best in his future endeavors. Good luck, Miguel!”