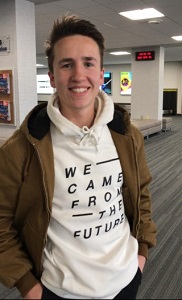 Augustin, or Gus as his friends and family know him, is a sophomore in high school in Appleton, WI. He is a Trimester student on the PSE program so he will be in America for a total of 12 weeks. Gabby, his Local Coordinator, says,

“Gus is kind. His English is spectacular, and he speaks Spanish fluently too. The sky is the limit for Gus!  We are happy to have him with us!”

Gus says that he has been enrolled in an online English program requiring him to submit written assignments every week. He claims that the program has significantly helped his written English skills, but the PSE program has allowed him to practice his conversational English daily. His speaking ability has improved tremendously over the course of the Trimester program so far, he says. 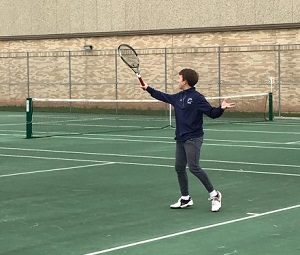 Gus is an avid tennis player whose interest in the sport began when he was five years old. He says that he enjoys playing with his family in his home country of France. He says that he takes private tennis lessons in France, as there are no club offerings or teams. Gabby shares, “With his natural talent as a tennis player, it wasn’t a surprise when he was immediately accepted on the high school varsity tennis team.”

“In France, tennis is an incredibly demanding sport. If you want to improve your game, you must pay for a private coach and for tournaments. Here in America, I can participate in tournaments and play every day with my team. You are so lucky to live in America!” he says.

Gus eloquently shares about his mindset while playing:

“Tennis is a mental game and requires a demanding mindset.  It involves analyzing the technique of the opponent and observing their game. I use this information to decide on my technique. I play every match differently because I’m not faced with the same opponent or style.”

Gus recently won second place in a tennis competition, and modestly shares that he probably would have taken first place, however, dehydration and fatigue due to the heat of the sun impeded his ability to do so. 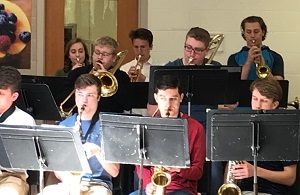 Not only is he athletically inclined, but musically as well. Gus plays the trumpet in the jazz band and enjoys having the opportunity to play once a week in school with the other students. He has been playing the instrument since he was six years old and recalls his first experience hearing the trumpet:

“I went with my parents to a friend’s house for dinner. I heard the trumpet sound coming from another room. The teenage son was playing it, and he became my role model. It was the first instrument that I had ever seen.”

Gus takes trumpet lessons in France and can play all different genres of music. However, he says that he really loves jazz. His favorite artists include Miles Davis, Ella Fitzgerald, Nina Simone, and Louis Armstrong. His favorite song is “Take 5” by Dave Brubeck. Gus says that listening to music helps him to relax after a school day. He enjoys listening to a variety of music from rap to classical. 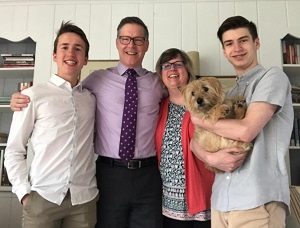 Gus has a close relationship with his host family. They visited Milwaukee, Wisconsin where he enjoyed racing Formula 1, and other virtual experiences, in a science museum. They also visited an aquarium and saw all kinds of fish and turtles. “It was really cool because I was able to touch the fish!” Gus says.

Matt, Gus’ host father, is the Executive Director of the local historical museum. Gus really enjoyed visiting his host father’s museum, and especially liked the Houdini exhibition because it featured several cool magic tricks which were explained and revealed.  He also appreciated the guitar and music exhibition. 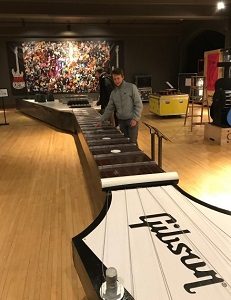 “Gus is a self-assured young man who is capable of taking on whatever comes his way.  We couldn’t imagine a better match for our family. He tries to figure out how to adjust to our life and is a pleasure to have in our family,” he shares.

Beth, Gus’ host mother, recalls when he was Skyping with his family in France on Easter Sunday. “They were joking back and forth. It reminded us of how we are with our family. The commonalities are remarkable!” she shares. She says that Gus is very thoughtful and made his grandmother’s chocolate mousse recipe for his host family to enjoy. 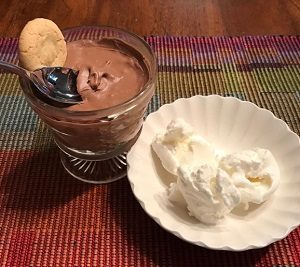 Gus says that he enjoys spending time with his host family. “We play mini golf, go to sports events, and play board games together like ‘Marbies’. I like this game because you can reverse the situation at any moment!”

Beth shares that in addition to playing board games, they enjoy going to mass together, encouraging each other, having dinner every night, and sharing about their day. 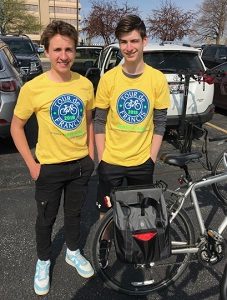 Gus is very close with his host brother, Joe. Together, they finished the Tour de Francis bike ride, a fundraiser for the school. They also traveled together as a family to Lake Michigan and went swimming together despite the frigid temperatures. This, according to Gus, has been his favorite memory while on the PSE program.

“It was crazy that we were in the lake in April. It was 35 degrees! My host parents didn’t think we would do it. I convinced Joe to go with me,” Gus says while laughing. 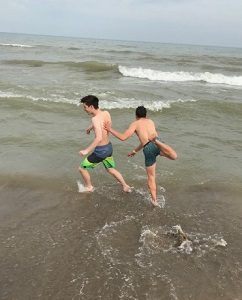 “We were especially happy when Gus was excited about seeing Lake Michigan. Our family is from the Midwest, and we live a very simple life. We spend a lot of time on the water. Our Lake Michigan experience with Gus was special because we shared something together that we all love and appreciate,” says Matt.

Gus shares that his PSE experience has been better than he ever imagined. He explains, “The school spirit, small school community, and the kind and gentle people are among the things that have stood out the most. Also, if a student has a passion for something, then they can participate in a school club.”

Beth says that they look forward to taking Gus to Chicago and visiting museums and monuments. Gus looks forward to visiting the Rocky Mountains. He looks forward to the beauty of the scenery and staying in a cabin. In the future, he wants to continue pursuing his online English program through his senior year. At that time, he will be able to receive a dual diploma in France and America. 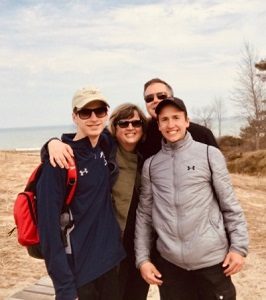 Whatever the future brings, we wish Gus much success!