Jaehun, or Jess, a PSE student from Korea, has discovered many things about himself since arriving on the program three years ago.

For example, Jess had no idea he was a talented distance runner before coming to the U.S. He has been a member of his high school Cross Country team in South Carolina since arriving, helping them to qualify for state championships all three years in a row. In Korea he did not have an opportunity to run cross country, and has really enjoyed being a part of the team.

“Jess was an integral part of the Cross Country team,” says his coach, Mr. Godwin. “Each day he brought his sense of humor and his desire to compete and run well. He worked diligently at every practice and really enjoyed the speed work days. In addition to being a leader by example, he encouraged his peers.” 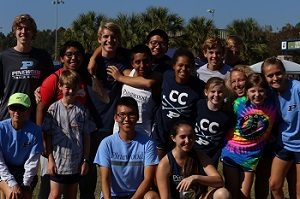 Jess has also excelled in academics. Finishing in the top ten percent of his class in the 2015-16 school year, he was the first-ever international student at his school to qualify as a Junior Marshall. As a Junior Marshall, Jess fulfilled his duties by serving as an usher at the school’s Baccalaureate program and graduation ceremony.

“Jess is an outstanding student and strong citizen in our community,” states his guidance counselor, Mr. Diffley. 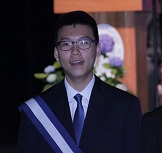 Nicole, his Local Coordinator (who also works at the school), adds, “Jess has been a top student since the day he arrived. He has consistently been involved in extra-curricular activities, which has enabled him to build good relationships with American students.  Jess has become a leader of his entire senior class.  I’m so proud of him!”

Other extra-curricular activities that Jess has been involved in includes theater. Some of his favorite memories include performing in school musicals. He has landed a lead role in this year’s musical “Monty Python’s Spamalot,” in which he will play “Patsy,” a servant of King Arthur.

“Being involved in theater and ensemble has been an amazing experience,” says Jess. “I have and am still enjoying every minute of it.”

Being an international student has not always been easy for Jess. He recalls struggling in the beginning when he first arrived on the PSE program, experiencing homesickness and culture shock. With the help and support of his host family, classmates, Local Coordinator and school staff he was able to adjust, he recalls, but it did take some time. 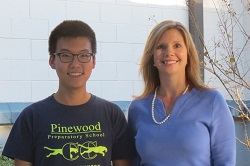 “These past three years with PSE have been great. I am completely satisfied with my host families, school, Local Coordinator and PSE overall. My host family is very supportive and has been wonderful. I have had lots of great opportunities to make friends and learn about the culture. Being involved in activities and being part of a team has helped me socially, and has improved my overall experience in the U.S.,” he says.

Once he graduates, Jess hopes to study Human Development and Psychology at a U.S. university. His host family says of Jess, “He always puts 110% into his extracurricular activities as well as his studies. He works hard and is dedicated to reaching his goals. I am very proud of Jaehun for his accomplishments and know he will do great in his future.”

When asked what advice he has for new students, he offers:

“When you first arrive on the program and are adapting to a new culture, you might have a hard time adjusting. However, there will always be a person willing to help you. Do not hesitate to approach others first and always be open-minded about new things. Also, getting involved in activities or a team is a great way to make friends. I absolutely love being part of a team.”

We look forward to learning about additional talents this exceptional young man discovers about himself in the years to come.