Right outside of Charleston, South Carolina lies a competitive private high school with rigorous academic standards. The outcome of long hours of studying and great self-discipline is well-represented in the members of the school’s Math Team.  Jaehun, a PSE student from South Korea, practices with his Math Team twice a week. Their hard work and dedication paid off on January 12th when the team placed second in a state level competition held at the Sumter Civic Center. 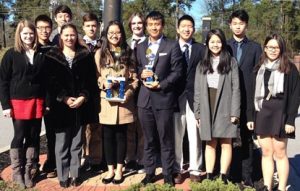