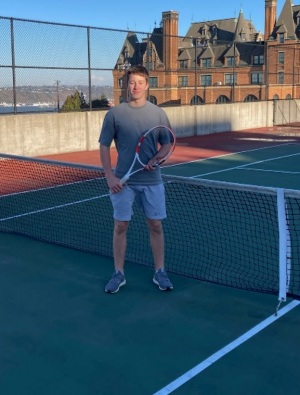 When Karl, from Germany, contemplated becoming an international student, his main focus went well beyond improving his English-speaking skills.

“I also want to know the USA not like a tourist, but by living in an American family like a normal high school student because I love America so much!”

Karl’s dream came true while attending high school as a sophomore in Tacoma, WA for one semester.  Barbara, his Local Coordinator, has enjoyed watching him grow while on the program. She shares, “Karl is eager to learn about our culture and experience life as an American teenager.”

She remembers when he first arrived in America:

“I met Karl upon his arrival at SeaTac airport. He met me with a cheerful ‘Hello!’, and our conversation flowed easily all the way back to Tacoma. I knew Karl would not have any trouble making friends at school.”

Barbara’s assessment was accurate. However, Karl says that making friends did take some effort. He explains that being in a new environment has required him to approach new people, talk with them, and get to know them. In Germany, Karl was always used to knowing people and being comfortable with them.

“When I meet new people, I’m not that open. I do love how friendly people are here in America. They are so open and nice to me!”

Host parents Tony and Bridgette describe Karl as quiet, respectful, and self-motivated. This is their first time hosting an exchange student, and they are very pleased. They share, “Karl is a well put together young man. We are enjoying our time, conversations, and experiences with him. He enjoys his time alone but blends in with all different social circles as well.”

Moreover, Karl states that interacting with people here in America has helped his English speaking, and he is excited that his English has improved so dramatically.

“I was not fluent at all when I arrived in America. I took five years of English in school in Germany.  I did not learn much…just singing songs, learning some grammar and vocabulary. Now, I’m being forced to speak in English. I’m even beginning to think in English!” (He smiles).

Karl’s love for America has inspired him to try new foods, and he soon discovered some favorites. He quickly developed a taste for burgers, fries, and milkshakes while frequenting ‘Shake Shake Shake’, a popular restaurant near the school.  “I also really like Mexican food, in general. Tacos and nachos are the best, in my opinion. The food is so delicious and has a lot of protein with the chicken and cheese and red beans.”

Karl needs the protein as he is an avid weightlifter and sports player.  Bridgette explains, “Karl loves to work out and utilizes our small garage gym almost every night on top of playing school sports and having a weightlifting class in his curriculum.”

One of his favorite sports to play is tennis, and he was eager to join the tennis team at school.

“I have made great progress with my tennis skills while in America. In Germany, I was only playing 2-3 hours per week. Here at school, I was able to play two hours every day!”

This increase in practice time allowed Karl to progress and fine tune his skills beyond his expectations. He exhibited huge success while playing JV singles.

“I won 8-0. I had to fight for every single point, but in the end, I stayed focused and did very well!”

He shared that the Tacoma School District identified him as one of four of the best tennis players in the district. In fact, the tennis coach planned on Karl playing in a tournament, but unfortunately Karl suffered an injury to his achilleas which ended his time on the court.

Despite this circumstance, Karl’s American dream did not end. In fact, he has enjoyed going on many family outings with his host family such as Disneyland, Universal Studios, and church. A weekend in California was very memorable for the family, and Karl reflects on wonderful memories of the trip:

“Universal Studios was my favorite. The Harry Potter castle was very impressive.” he shares.

“I enjoyed the Universal Studios tram ride so much. It was interesting to learn about the making of Hollywood movies like Back to the Future. It was not just another boring tram ride…the King Kong movie made it awesome!” (He laughs).

Bridgette recalls, “I really enjoyed taking Karl to Universal Horror nights this year. He was unphased by most of the haunted houses but one, and he jumped in a little scared…I know he enjoyed it!”

Bridgette expresses the special bond that Karl has developed with the family.

“Karl fits right into our family like he is a son, brother, and nephew.”

“Karl has also pulled our teenage son, Conner, out of his shell a bit more and given him reason to be a bit more social.”

The boys played on the tennis team and spent a lot of time together on the court. The family’s adoration for Karl is mutual, and their time together has made his American family experience dream come true.

As for future plans, Karl dreams of attending a university in Germany studying Physics. His mother is a Physicist, and he’s looking forward to following in her footsteps. He plans on earning his Master’s Degree and then working for his Doctorate in the field. He sees this plan as a “good base for the future” and is looking forward to staying focused to accomplish his goals.

Barbara closes with this heartfelt message to Karl:

“My hope for Karl is that he builds solid relationships with adults and friends, both American and European, while he is here and that he will stay in touch for the rest of his life. His language skills, intelligence, and vibrant personality are some of his strengths. Having the opportunity to test those skills while on his exchange year and build his confidence is an invaluable experience. I hope when he has future moments of disillusionment he will look back on this time and be bolstered by his accomplishments and his memories of Tacoma. He will always have people who care for him and wish him all the best cheering for him from America.”