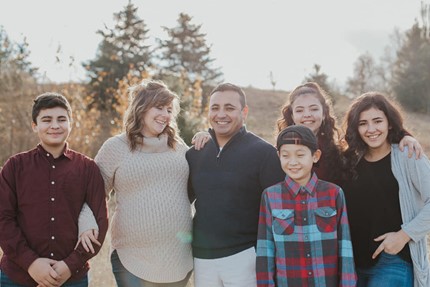 Ganpin was 11 years old and entering the 6th grade when he arrived from China to Portland, OR, USA on the PSE program in 2019. He is now preparing to graduate from the 8th grade and enter high school next year. He has been with the same host family since arrival.

“When Ganpin arrived, he was a child. Now, he’s a young man! He went from being a guest to being a full-fledged family member,” says April, his Local Coordinator, who marvels at Ganpin’s growth over the last three years. 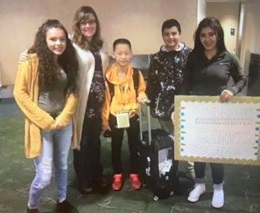 Ganpin’s host parents, who have four children of their own, couldn’t agree more. They feel that Ganpin truly has become an integral part of the family. Stephanie, his host mother, reflects on all of the life events that he has experienced with them, including the birth of their youngest child, Riley.

“Riley is very cute,” says Ganpin. “I play with him with his toys and read to him sometimes. He is always yelling “PANCAKE!” to find out where I am. He calls me pancake because he can’t say my name, and that’s how it came out. (laughs) He likes to sit with me and share lunch. He always thinks that what I am eating looks better than what he is eating even when we are eating the same thing.” 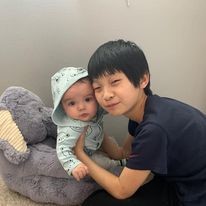 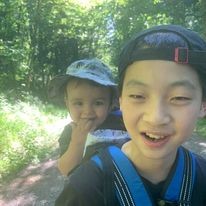 Ganpin also shares a special bond with his host brother, Daniel. They are the same age and have birthdays one day apart, so have been able to celebrate their last two together.

For his 13th birthday, they went to the Sky Zone jump house for some birthday fun. For his birthday dinner, Ganpin cooked the family a meal of live crawfish that he hand-picked at a market. For his 14th birthday, the family made an ice cream cake together. 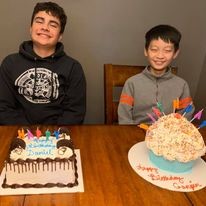 “Daniel is always around. We are the same age and go almost everywhere together. We play basketball a lot and watch T.V. together,” Ganpin shares.

Emilie and Julia are Ganpin’s host sisters, and his connection with them is also very special. In fact, Ganpin appreciates his relationship with all of his host siblings.

“My best friends since coming to America are my host-siblings – Emilie, Julia, Daniel, and Riley. I hang out with them every day, and we play a lot of basketball at the park together. They take me with them to go to the store and buy things that I want or need, and we play video games together.” 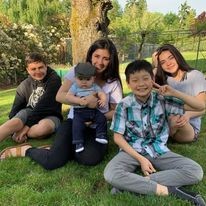 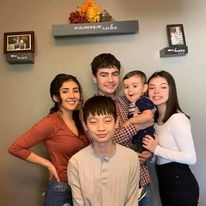 Ganpin says that he loves his entire host family and appreciates how his host parents take him to fun places, bring him back and forth to school, help him with homework, and cook for him.

“They are always interested in what I am learning at school and want me to tell them about my day,” he shares. “The thing I appreciate the most is that they always keep me fed! I love to eat and to help decide what is for dinner. At first, it was difficult to get used to the type of food they eat here, but now I really like it. Sometimes they will even take me to the Chinese grocery store and let me pick out things to make for dinner. I have made Hot Pot for everyone twice – that is my favorite!”

Stephanie explains that Ganpin genuinely cares about other people and is always ready to lend a helping hand. “Whether he is waiting at the door to help unload groceries or giving up his favorite spot on the couch so someone else can have a turn there, Ganpin is always putting others first,” she shares.

“He has just become one of us,” says Stephanie. 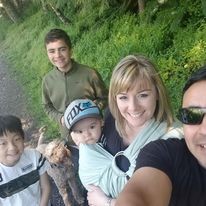 Stephanie explains that their experience hosting Ganpin through PSE has been nothing short of incredible. Part of that is credited to the great kid that Ganpin is, and the other part is credited to April, for being a wonderful PSE Local Coordinator.

“PSE has always been incredibly supportive in enhancing our experience. Our monthly check-ins with April are always a good reminder that we have help available if we need it,” she explains.

Stephanie describes Ganpin with one word – inquisitive. She reflects back when he first arrived in America three years ago when he barely spoke English, so communication was challenging. In fact, the family used Google Translator and hand motions throughout the first few months of his arrival so that they could communicate effectively. It did not take long for Ganpin to show improvements with his English, however, as well as to adjust to his new surroundings and American culture. His inquisitive nature continues to flourish. 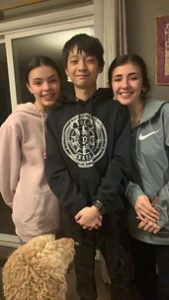 “He is always right in the middle of everything asking questions. He is so smart and has the ultimate thirst for knowledge,” share Stephanie.

Ganpin has learned a great deal about American culture over the past couple of years.  He says the biggest difference is that Americans say, “I love you” and “I miss you” a lot.  “Another thing that surprised me was that I can talk about my faith with people at school or outside my family,” he says.

Ganpin enjoys school and reports that he is doing well. He says that his favorite subject is Math because it is the same in China and America. He shares, “I work really hard to understand all of my subjects but reading and writing is still hard for me. My teachers and my host family had to help me a lot when I first came to America, but this year I do not need as much help.” 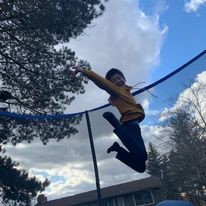 April admires Ganpin for his success and progress with the English language. She recalls his student orientation when his chaperone informed her that Ganpin could not understand a word she was saying.  She says that now he has a deep understanding of the language including innuendos, slang, and jokes.

“Over the past few years, Ganpin’s confidence and depth of knowledge of the English language have improved dramatically,” she shares.

Ganpin’s host family has enjoyed helping Ganpin improve his English. They watch movies and play games together, offering Ganpin an opportunity to practice his English while enjoying family time.

“I like to play games (chess, cards, Chinese Checkers) with Stephanie, especially because I usually win!” laughs Ganpin.

Since the outbreak of COVID-19, Ganpin was not been able to return to China last summer to be with his family and has remained with his host family since the start of the 2019-20 school year. “I imagine this to be exceedingly difficult for a young boy not being able to see his family for almost two years. However, Ganpin always takes everything in stride. He never complains and always falls back on his confidence that God will provide for whatever he and his family needs,” Stephanie comments. 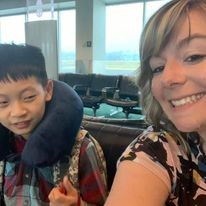 Despite the pandemic, April says that Ganpin has made the most of any opportunities he has been provided. “He continues to be a positive influence in terms of attitude and willingness to keep moving forward despite the slower pace of everyday life.”

One interest that Ganpin has been able to pursue while on the PSE program is basketball. He enjoys daily trips to the park near their home where he plays basketball with Emilie and Daniel.

“I played on the basketball team at school for the first two years. When I first came, I was nervous about playing on a team and it took me a few weeks into the season to decide that I wanted to play. After I got involved with it, I realized it was really fun! I am not as good at sports as my classmates – I think it is because they are all bigger than me – but I like to play. I have been practicing basketball almost every day with my host family since I came,” he shares. 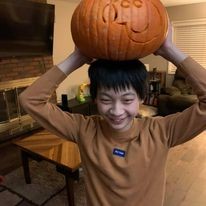 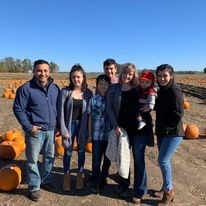 The family has shared many holiday festivities together including dressing up for Halloween, going to pumpkin patches, cutting down and decorating Christmas trees, and gathering with extended family for Thanksgiving and Christmas. Thanksgiving 2020 was fun for the family, especially when Ganpin displayed his creative abilities by making an impressive veggie turkey. 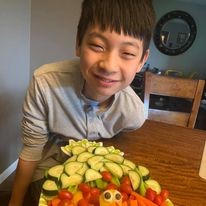 Celebrating Christmas with his host family for the past two years has especially been a highlight of his experience.

“I was most surprised by the giving of gifts around Christmas. We do not do that in China. The first year I was here, I was really surprised to receive gifts from my host family. The second year, I was most excited to give gifts. It was so much fun to watch everyone open gifts that I picked out for them. It is a really fun way to celebrate Jesus’ birth and to remember how much he loves us.” 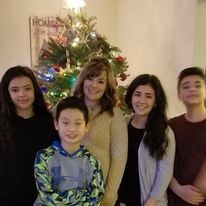 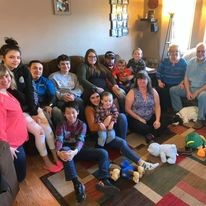 This past Christmas, the family visited family members in Klamath Falls. This has been Ganpin’s favorite memory thus far.  He shares, “We all just hung out and played with gifts that we received for Christmas. The whole family is very nice to me. We played Chinese Checkers and they taught me how to play the card game called Pinochle.”

Stephanie reflects on some of the other wonderful memories the family has made with Ganpin including visiting the Oregon coast twice (Lincoln City, Newport, and Seaside), Multnomah Falls, Oregon Zoo, and Crater Lake. 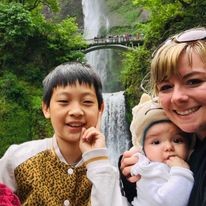 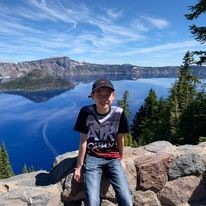 “I really liked going to the Oregon Coast and seeing the ocean. It is so big! It was really fun to play in the sand and find little bugs, rocks, shells, and other little animals. We also went to the aquarium while we were there, and I enjoyed seeing all of the sea animals,” recalls Ganpin.

Their family visited southern Oregon where Ganpin learned how to ride a four-wheeler, ride horses. He has also had opportunities to go fishing with his host family, go hiking, make S’mores by a campfire, and attend a Blazer’s basketball game at the Moda Center. 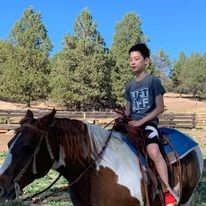 He says that the exchange experience has changed him as a person, but this goes beyond growing older and taller.

As far as future activities, Stephanie says that the family will have a special going-away party for him prior to his departure this summer.  She elaborates:

“His party will be combined with our oldest daughter, Emilie’s, high school graduation party. Out of the four host siblings, Emilie and Ganpin have grown the closest over the last three years. She is thrilled to share her graduation party with him! They are already starting to discuss themes and color schemes!” 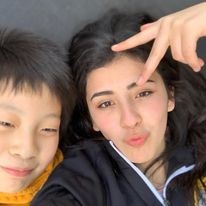 Reflecting on how the hosting experience has impacted their family, Stephanie shares:

“We were all extremely excited to have Ganpin coming to stay with us. We thought of it as an opportunity to share God’s love with a child from another family and teach him about the American culture. Little did we know, he would be the one teaching us! From him, we learned about Chinese culture. We learned how incredibly (adaptable) kids are in learning to speak a new language. Our kids learned the American way of doing things is not the only way, and to be (accepting) of the differences between cultures as a way to personally honor Ganpin. He has taught us so much about God’s love in the way he lives and serves others above himself.” 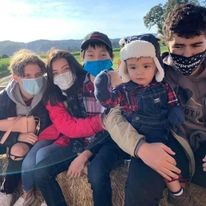 Stephanie sees Ganpin accomplishing anything that he sets his mind to. “He is an incredibly smart young man that loves puzzles and problem-solving. My husband, Freddie, thinks that someday Ganpin will be a video game programmer because he loves to play video games so much!”

April closes with this message for Ganpin:

“Dear Ganpin, I am so incredibly proud of all the accomplishments you have achieved in your life. You are a source of inspiration to those around you. It is an honor to know you, and I thank you for being such a sweet family member for your host family. I look forward to watching you continue to grow and achieve your academic and life goals.”