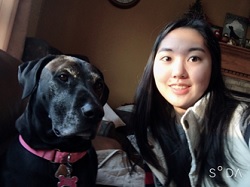 Yu Ri, or Crystal, was afraid of dogs, cats, and other animals before coming to the U.S. Now, she spends her time volunteering to care for them.

“When I first came to America, my host family had a ginormous dog and a bird at our house. I became comfortable with the dog because he was so sweet! My current host family has a ginormous dog (laughs) that is half Great Dane and two cats. I had never seen cats before in my life. I fell in love with them because they are so adorable!”

A 10th grader from South Korea who attends school in Illinois, Crystal was looking for a place to volunteer and decided that she would like to work with animals. She volunteers 2-3 times per month for three hours at a time at Noah’s Ark Animal Sanctuary in Rockford.

“I thought I could help them and care for them. I heard about this animal shelter from school through a website that provides tons of websites about volunteer opportunities near here,” she says.

“When she talks about her volunteering, she lights up! She is loving it!” shares her Local Coordinator, Suzy, who describes Crystal as sweet, soft-spoken, kind-hearted, and am amazing young lady.

“She’s very dedicated to whatever she does.  She’s a really neat young lady all the way around.”

Crystal’s responsibilities at the sanctuary include walking dogs, cleaning cages, providing water to the animals, and ensuring people wash their hands before touching them. What she loves most about her volunteer work, however, is taking care of the kittens, walking the dogs, and playing with the animals in the playroom.

Crystal explains that volunteering at the animal shelter has increased her awareness about the animals’ feelings, varying characteristics, and personalities.

“Some dogs are really shy, but when you become closer to them, they are so sweet and active,” she shares.

Through her volunteer work, Crystal has learned about the horrifying past experiences of some of the animals and has been impressed with how forgiving and resilient they are. She recalls one cat, Berro, who was shot in the head by a human and then rescued by the shelter. Unfortunately, Berro lost an eye, but thankfully he survived the incident. She thought that it would be hard for him to trust humans because of this horrible experience, however, Berro is very loving towards her and other humans. She has learned that even cats can show forgiveness!

Crystal tells the story of another animal at the shelter:

“There was a German Shepherd who was just a puppy – only about one year old. His owners did not want him because of his high energy and level of activity. He would growl when people came toward his cage. I realized that being energetic was not his fault. He was a puppy! So, I took him to the playroom and threw the ball for him. He jumped on me, and we had so much fun! After he saw me again, he was happy – and that made me very happy!”

Crystal’s dream is to someday become a doctor. She is very interested in psychology. And of course, some day she would like to own her own dog or cat.

“This volunteer experience has helped me learn about animal emotions, personalities, and character. I think it will be good for me to understand animals before studying humans,” she reflects.

Crystal wants other students to know that volunteering is a great way to learn new things and meet new people. “If you have a chance to volunteer, then do it!” she says.

We look forward to following Crystal’s journey and wish her the best of success!