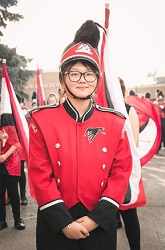 Simiao, or Monica as her friends know her, is a Junior who attends high school in Michigan.  She is currently involved in two band activities at school. Monica plays percussion instruments in the school’s concert band and the xylophone in the marching band.

Monica did not always have the passion for music that she has now.  She reflects back to when she was a young child in China and her mother asked if she wanted to learn how to play piano.  Thinking that it would be too difficult, she declined the offer.  Her interest in learning how to play the piano emerged in middle school, and she has been playing ever since.

When asked about how she started participating in the school marching band, Monica recalls:

“I joined the band in my second semester as a Sophomore.  My friends asked me to join, but I really didn’t know what to play.  I chose the xylophone because it is kind of like the piano, and I can play it very well.”

Monica shares a recent marching band accomplishment, “Last year we performed in a Thanksgiving parade in downtown Detroit.  I held the banner in front.  It was so cold but so much fun!  I was on television for like 5 seconds, and it is on YouTube!”

Monica states that she has learned a lot from her band experience thus far.  She says that many band members do not know how to read music; they just remember the notes that they play.  She enjoys teaching others how to read music, and she is also currently learning how to play the bass and snare drums.

When asked about a favorite band memory, Monica shares a story about when she performed with her group in a festival:

“It was in September, and it was hot.  I had to push the xylophone by myself, and I didn’t drink enough water.  I passed out on the football field!  When I woke up, I continued anyway.  I felt so sorry for the band, but they reassured me, and we had a group hug!  It really brought us all together.” 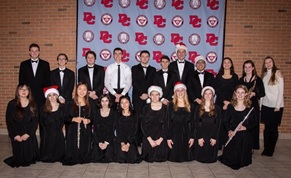 She is very excited to be performing in Florida with her marching band over Spring Break.  The band will be performing in a parade in Magic Kingdom, and this will be the first time that Monica will be playing the cymbals.

“I am so excited to go, and I have been practicing since last semester!” Monica exclaims.  She reports that the normal marching band usually has around 60 performers, but for the trip there will be approximately 100 performing.

Monica is described by her Local Coordinator as mild-mannered, outgoing, and sweet.  She shares that Monica often jumps in to help her host family without being asked.  She continues, “Monica has taken on a leadership role with the other international students.  She introduced them to her American friends and ensures that they are always doing things together.” 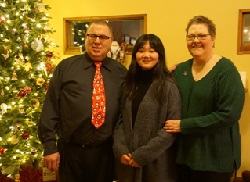 Chris, Monica’s host mother, says that she is their thirteenth exchange student. They have hosted students from eight different countries.  She shares that the whole band experience is new to their family.  Their family enjoys going to all the football games to support Monica and watch her band perform.  Chris says that Monica has made some great American friends through her band experience.  She continues,“There always seems to be a party after the band performances. We try to support her and take her to all of the band functions.”

As for their future plans with Monica, a visit to Canada and Niagara Falls are on the list.  Chris shares, “One day we’ll go to China and visit Monica and her family.  I can see that we will continue our relationship, and when it’s time, I expect to be invited to her wedding (laughs)!”