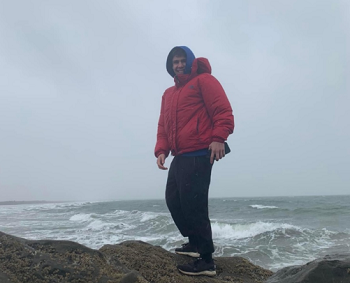 Taro, from Germany, is a 10th grade student attending a high school in Washington. During his PSE exchange experience, he has relished his time on the west coast. Even without understanding the game of football, Taro enjoyed attending a Washington Cougars football game with his host family. He has also appreciated ocean visits, hikes, movie nights, visiting friends, and church youth group activities.

His host father, Dave, describes him as very social, super engaging, and having a great sense of humor.  Dave shares that Taro’s amusement captured them on the first night he arrived.

“Taro was very tired and hadn’t eaten anything on the plane, so we took him out for Red Robin burgers and fries.  When the food arrived at the table, he said, ‘Geeze! No wonder Americans are so big!’ We picked up right away that he was going to be a fun kid to have around.” (laughs)

Dave continues, “He wasn’t afraid to say what was on his mind, and we really appreciate a young man who has thoughts and opinions.” Dave says that they have enjoyed and grown to love Taro, and that he is now a part of their family.

Dave describes the relationship between his son and Taro as typical brothers who tease each other incessantly. “They wrestle at completely inappropriate times and generally have a fantastic time teasing each other, staying up late, and playing video games into the night.”

Taro has a special bond with Pepper, Dave’s daughter as well.  Dave shares, “He and my daughter have a really unique big brother-little sister relationship as Taro has a sister the same age in Germany!”

Dave says “the car rides together are incredibly fun because they tease each other and exchange snarky remarks which leads to lots of laughter!”

Taro loves his host family and how they accept him for who he is. “The thing I appreciate most about them is how accepting and open they are. Because of that, I’m able to really feel at home and have an amazing time over here!”

His favorite memory on the program was a three- day trip to Los Angeles where he spent time with other exchange students.

“We had an amazing time exploring Disneyland, the Santa Monica Pier, and Universal Studios!”

One of Taro’s best experiences while on the program is joining the wrestling team at school. Taro had not experienced wrestling before coming to America. “I was always interested in combat sports like Kickboxing and MMA, so I decided to give it a try,” he shares.

Since joining the wrestling team, Taro enjoyed himself immensely while learning about the sport.  “What I really like about wrestling is that it is a combination of skill, technique, knowledge, and also instincts.”

He was amazed at how physically challenging the sport is and says that it is the hardest he has ever worked out!

Taro has experienced both wins and losses on the team and shares his perspective on how losing can lead to improvement. “It might be discouraging for a time, but you learn not to make the same mistakes. Eventually, you gain confidence.  Competing and using what you learned from hours of hard training feels super rewarding…especially if you succeed!”

Taro has taken on the challenge and has proven that hard work can lead to success. He recently participated in a 12-hour wrestling tournament. During this event, he wrestled five times and placed 2nd in his bracket!  Way to go, Taro!

Taro mentioned to Dave that wrestling is not common in the high schools in Germany, and he wishes that he had more time to grow and excel in the sport here in the U.S. Dave arranged for Taro to keep his wrestling bag, and that made Taro very happy!

Taro says that he’s learned a lot while on the PSE program and has grown as a person. “I’m more open and have a better view of both the German and American cultures and ways of thinking,” he explains.

Dave reflects on his hosting experience with Taro, “Honestly, we couldn’t have asked for a better fit for our family.  We have learned to love him. He’s part of our family!”  He shares that the family will miss Taro very much when he goes back to Germany. They were able to extend his stay through the 4th of July, and the whole family is happy about that!

Candie, Taro’s Local Coordinator, admires him for always wearing a smile and showing gratitude. She closes with this message:

“I’m going to miss your easygoing and carefree spirit, Taro. You were always a pleasure to work and visit with. You always made me laugh. I liked how you were always positive and enjoyed the exchange experience. We will miss you!”